Craft Beer Week was created 12 years ago in a nationwide effort to celebrate small and independent craft brewers’ diversity, creativity and passion for the beverage they love.

The inaugural Greensburg Craft Beer Week will kick off its celebration with the community and craft beer from Oct. 9 to15.

Funding this project are local businesses including Tapped Brick Oven and 14 other sponsors. Craft beer aficionados will tell you Tapped has a fantastic selection of local craft beers.

Greensburg Craft Beer Week will be filled with dozens of events supporting the local community with a portion of the proceeds from commemorative T-shirt sales going to benefit the Juvenile Diabetes Research Foundation. The Downtown Greensburg Project is a division of Jessica Hickey’s company BIA Creative. Jessica is claiming her place on the craft brew map by making sure Greensburg Craft Beer Week is a success for the community.

The week will include tap takeovers at Quinn Brewing Co. and Oliver’s Pourhouse; beer pairing dinners with Sun Dog Dawg Café and Four Seasons Brewing Co.; tapping firkens from Full Pint, Fury, Levity and Four Seasons collaboration beers; live music featuring Abacus Jones and more. Events will be at local restaurants, breweries and other businesses throughout the Greensburg area. Additional information can be found by visiting the events page at greensburgcraftbeerweek.com.

Collaboration beers have not only been a beer-week tradition, but have become a highlight to the event that brings craft beer consumers from all over to try these one-time-only brews. There is no shortage of collaboration beers for Greensburg Craft Beer Week.

Here are a few you don’t want to miss:

Red IPA (ABV 7%). This beer has tropical aromas. Brewed with a bit of oatmeal to give it a smooth taste with a little more body. Release party at Parkwood Tavern at 5 p.m. Oct. 11.

Double IPA (ABV 8.5%). Light golden color. Floral and citrus aromas. Bitter with a bit of a malt. Slight boozy taste of alcohol on the back end. Available at All Saints Brewing Co. and Rivertowne Brewing Co. during Greensburg Craft Beer Week.

Fosters Pumpkin Project is an ale brewed with pumpkin and spices (ABV 7%). Crafted by the brewers at Yellow Bridge and the team from Tapped Brick Oven. Brewed with fresh ginger root, whole cinnamon, and fresh whole hops. One dollar from every pint will be donated to Foster Love Project, which will help foster children and their families. Only available at Tapped Brick Oven and at Yellow Bridge Brewing Co.

Baltic Porter brewed with plums (ABV 6.4%). Dark in color with no bitterness. Malty with the subtle taste of plums that were added near the end of the brew cycle. Served in a tulip glass to capture the aromas. Available at The Westmoreland Museum of American Art on Oct. 13 for the Art on Tap event. Also available at Fury and Levity Brewing Co. during Greensburg Craft Beer Week. 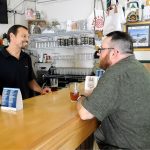 Greensburg gets its own craft beer weekPress
X