Lets Get a Little Physical During Greensburg Craft Beer Week

Nothing is better after a workout than a beer and we have a bunch of events that fit just that! All of these events are perfect for a beginner, the person who often works out, or just a beer lover! Make sure to check these ones out and register in advance for the ones that have pre-registrations to save your spot!

Who doesn’t love a little yoga and beer? We do! This one at YBB is one of 2 that we have at an actual brewery during GbgCBW. Relax with instructor Serafina, for an hour long session and enjoy a pint of YBB beer before, during or after! $15 gets you into class along with a pint!

at All Saints Brewing Company with Red Brick Yoga – September 25

at Red Brick Yoga with Tapped Brick Over & Pour House

Another completely unique event this year is Poles & Pints at local fitness studio, FitnessEnvi! Learn pole fitness moves for all genders followed by a tasting from Sobel’s Obscure Brewery! This is a free event, so make sure you stop by to give something new a try!

Everyone knows all runs should end with a beer or two. When we used to run marathons (haha not anymore, we just do the drinking part) we would end training runs with a nice cold beer to build back up those carbs. Well Run Greensburg, Gingerbread Man Running Co, and Hugo’s Taproom are bringing you a Saturday morning fun run followed by a refuel of beers and beer cocktails! This is a free event (drinks are not included in the free part) but try to sign up in advance to give them an idea of how many runners there will be!

The Downtown Greensburg Project is bringing one more Yoga Under the Stars class to the community for the year. This time with a free beer tasting following class at Hugo’s Taproom. You’re not going to want to miss this one, the beers attendees will be tasting are from a brand new brewery that hasn’t been announced yet! $10 per person gets you into the class on top of the Robert Bell Parking Garage.

Thank you to all of our Sponsors! 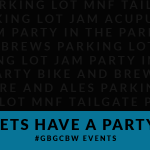